This Monday, Ireland celebrated a bank holiday. Schools and offices were closed, I had the day off of work, and I woke up sans alarm feeling as giddy as Vernon Dursley when he remembers there's no post on Sundays. Before long, it was noon, and I was sitting in my pajamas on my couch, scrolling through my Instagram feed, and wondering, "How can I be more basic today?" And then I saw it. 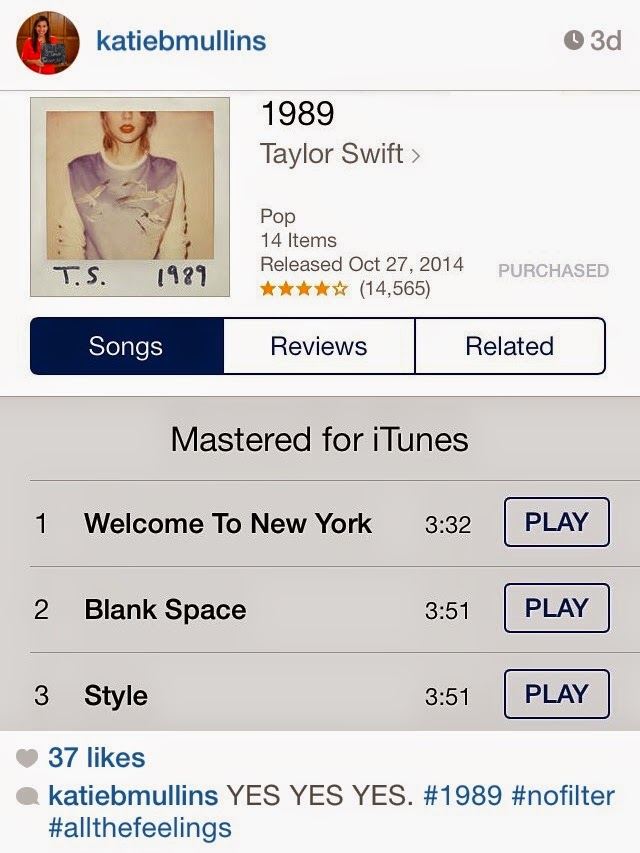 My word. Today was the day of Taylor Swift's new album drop. "Shake It Off" is a hot club banger. I like Polaroids. I needed to make it mine.

I bought the album, and I soon knew I would have to reprise my role as T Swiz blogger (a la 2012) to write a review. Friends, don't get me wrong: I like this album. A lot. I was very literally dancing around the kitchen while listening to it the first time three times and attempting to sort my laundry. But I have an assertion to make about this album, dear readers, and I make no apologies for it: this is not her best work.

This is a good album, filled to the brim with fun pop songs. But Tay Tay does not succeed at pure pop in the way that she succeeded in her former brand of pop-country. Red certainly was, in almost all senses of the word, a pop album, but Tay Tay's team still branded it as country, kind of - and it was better for it. In her adamant declarations that this is her first pop venture, T-Money has lost on 1989 the storytelling ethos that made her songs so good back when they still clung to some semblance of country. Polaroids are an apt symbol for this album, because where Taylor once gave us fully-formed stories that made us relate and feel and cry like an eighth-grader, 1989's lyrics give us merely blurry snapshots of the stories that are hiding somewhere behind her sea of one-line choruses and club-banger hook-y jams.

In scrolling through Tay Tay's Instagram this morning, I found that Billboard's review says 1989 "finds Swift meeting Katy and Miley on their home turf and staring them down." I disagree. 1989 certainly finds T Swiz meeting pop stars on their home turf, but it finds her merely casting friendly glances across the turf at them and inviting them over for tea, not in any way "staring them down." The pop songs of 1989 are good, but in their attempts to mimic current pop trends, the only distinctive thing about them is Taylor's now very recognizable voice - which, if we're being honest with ourselves, isn't good enough to carry an album by itself.

What can carry and is carrying an album - and, indeed, a career - is Tay Tay's relentlessly charming persona. With her "quirkiness" and her love of cats and filters and sweaters and hair and stuff, Taylor Swift makes you (more and more by the day) want to be her best friend. It is for this reason that I love this album so darn much, even as I can stand back and observe that she peaked musically at Speak Now. (I SAID IT.) The appeal of good pop music lies in its ability to make you love it whether you want to or not, and the appeal of Taylor Swift lies in the exact same practice. Put those two together and you've got an album that I haven't stopped listening to for the past 72 hours.

"Welcome to New York" - absurdly bright-eyed and idealistic about the concept of New York City, which is exactly how I feel about New York City; will feature in every montage of young movie heroines Arriving In The City for the First Time for the next decade without exception, and I will love it every time.

"Out of the Woods" - verses come so close to giving us an actual story, then she hits that awful chorus and dashes my hopes forever; "fli-ying" is not a word.

"All You Had to Do Was Stay" - DO YOU WANT HIM TO STAY, THOUGH, TAYLOR?

"Bad Blood" - jam. This is a jam. That's all I can say. Good call to put reverb on the chorus to make it sound like there's a throng of angsty teens and twenty-somethings singing along with you, T Swiz, because there is such a throng. It's called everyone who's bought this album. I am their leader.

"Wildest Dreams" - you are trying very hard to be Lana Del Rey, and I would like you to stop.

"I Know Places" - 1) Title makes me think of "I Know Things Now," which is a little too close to relevant for the content of this song, which makes me a little uncomfortable. 2) Possibly my favorite song on the album. When she hits the chorus for the second time and shrieks out that "WE RUN!" at 1:39, all of my can is lost, and I, in fact, cannot even.

Taylor Swift, I stand by my assertion that you have done better than 1989. But man, this album is good.

THIS IS REAL, THIS IS ME

Class of 2010 at Logansport High School, home of the Berries. Class of 2014 at Notre Dame, where students are Domers. Domer. Berry. And now I live in Ireland.

AND SHE TWEETS, TOO